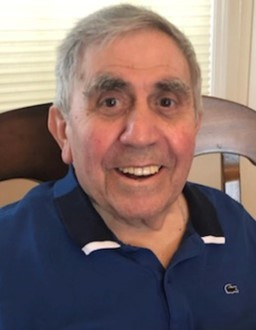 Please share a memory of Anthony to include in a keepsake book for family and friends.
View Tribute Book
Anthony Joseph Mercogliano (Tony) of Merrick, NY died surrounded by his loving family on September 8, 2022 at 95 years old. He was born in Brooklyn, NY, on July 12, 1927, the son of Vincenzo Mercogliano and Maria Theresa Santarella. Tony grew up in South Ozone Park, NY during the Great Depression. After graduating from high school, Tony enlisted in the United States Navy during World War II. He was commissioned and assigned on Navy Destroyers - the USS Farqhar, the USS Hilbert and the USS Weaver - as a Seaman First Class. Upon honorable discharge when the war ended, he attended Saint Francis College in Brooklyn, NY on the G.I. Bill and received his Bachelor of Arts. He then furthered his education and received his Masters of Arts degree from New York University. Tony worked as a mathematician for Grumman and then became a middle school math teacher for both the Seaford and Lawrence Public Schools. At Lawrence Junior High School, he was the Chairman of the Math Department. For 36 years, Tony dedicated his life to teaching mathematics and was remembered as one of the most respected and loved educators to pass through the doors of Lawrence. Tony had a long and wonderful retirement volunteering at his church, Cure of Ars Catholic Church in Merrick, NY, spending time with his good friends and family and watching his beloved Yankees. Tony was a wonderful colleague, neighbor and friend. He was known for his infectious smile, contagious laugh, and storytelling. Nothing made him happier than his grandchildren, and he never missed any of their sporting events, school plays or concerts, no matter how far the drive. Tony is survived by his loving wife of 56 years Louise (Ferraro), his children, Theresa Mercogliano, Anne Young (Andrew), Anthony Mercogliano (Cynthia), Christina Crowley (David) and his adoring grandchildren, Emma, Ryan and Sean Mercogliano, Jack Young, and Grace, Thomas and Matthew Crowley, as well as his brother, Vincent Mercogliano. He is predeceased by his parents, his sister, Felicia Signoretti and his brothers, Luigi Mercogliano and Benedetto Mercogliano. Visitation will be at N.F. Walker Funeral Home in Merrick, NY on Sunday, September 11th from 2:00-5:00 pm and 7:00 – 9:00 pm. A Mass of Christian Burial will be celebrated at Cure of Ars Catholic Church at 10:30 am on Monday, September 12th and burial at Cemetery of the Holy Rood in Westbury, NY. In lieu of flowers, donations in Anthony's honor can be made to the Saint Francis Breadline https://stfrancisbreadline.org/
To send flowers to the family or plant a tree in memory of Anthony Mercogliano, please visit Tribute Store
Sunday
11
September

Share Your Memory of
Anthony
Upload Your Memory View All Memories
Be the first to upload a memory!
Share A Memory
Send Flowers
Plant a Tree