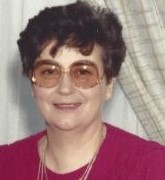 Please share a memory of Elsa to include in a keepsake book for family and friends.
View Tribute Book
Meeting will start at 11:55AM Watch the Service for Elsa VIA: https://vimeo.com/514837905 Elsie (Elsa) Otille Maria Magdalena Leppig was born in Glonn, Germany on July 22, 1935 and lived with her parents and siblings in a little town named Binsfeld, about 12 miles from Wurtzburg. She had a challenging childhood in Germany during World War II. Elsie had an undiagnosed severe visual impairment and dyslexia and she only completed the 5th grade before she needed to stay home and help out. She had lots of chores to do, but sometimes she would sneak into the outhouse to read a book! In 1953 at the age of 18, Elsie packed a small school bag and took a plane to New York, where she joined her brother Josef, her uncle Gottfried, and her lifelong friend Mary Burkard. She worked as a nanny/housekeeper for a number of years and became a United States citizen on February 1, 1960. A few weeks later, her sister Helga helped her obtain a job as an inventory clerk in the production department of the Music Division of Warner Bros. Her boss was Joseph Beganskas and they quickly became an item. Joseph recalls, "On weekends during the summer of 1960 we spent our time together regularly at Jones Beach. In fact, our trips were so regular that we were able to monitor the construction of the Throgs Neck Bridge as we traveled over the Whitestone Bridge from the Bronx where Elsie had her apartment. I was living with my parents in Woodhaven, Queens at that time. We called it 'our bridge' because the frequency of our toll trips on the Whitestone Bridge certainly contributed to the cost of the Throgs Neck Bridge in a small way." Elsie and Joseph became engaged on Valentine's Day and married on July 1, 1961. They rented an apartment in Richmond Hill and Michael, Victor, and Andrew were born within three years. In 1965, the family moved to Garden City Park where Erica, Mary, and Theresa were born. As the children grew older, Elsie worked as a home health aide. Elsie loved playing cards. It was the only pleasure she allowed for herself. Everything else was about serving her family. She would have her "ladies" over for card night on a Friday night once a month. Elsie was an active parishioner at Holy Spirit R.C. Church throughout her years in Garden City Park and lived her faith in the way she sacrificially cared for her children and anyone else who might need a helping hand or a warm meal. Elsie and Joseph moved to Dominican Village senior housing in Amityville in 2016. The last five years of her life were marked by medical issues stemming from diabetes and Parkinson's disease. Elsie remained fiercely independent for as long as possible and late in life learned not just how to give help, but to accept it as well. Elsie contracted pneumonia and spent the last 24 hours of her life peacefully in the presence of her family. Elsie is survived by her loving husband Joseph, and children Michael (Susan), Victor (Karen), Andrew (JeanMarie), Erica (Vincent) Marquardt, Mary (Don, deceased) Sommer, and Theresa (John) Puglisi. Many had the privilege of calling her their Oma, including Sarah (James), Michelle (Tommy), Nicole, Matthew, Andrea, Joseph, Natalie, Julian, Destiny, Gianna, Faith, Angelina, Alexa, Dante, Jaydon, Kyle, Steven, William, and Amelia. Elsie is also survived by her siblings Josef, Helga, Anni, and Norbert.
To send flowers to the family or plant a tree in memory of Elsa Beganskas, please visit Tribute Store
Friday
19
February

Share Your Memory of
Elsa
Upload Your Memory View All Memories
Be the first to upload a memory!
Share A Memory
Send Flowers
Plant a Tree