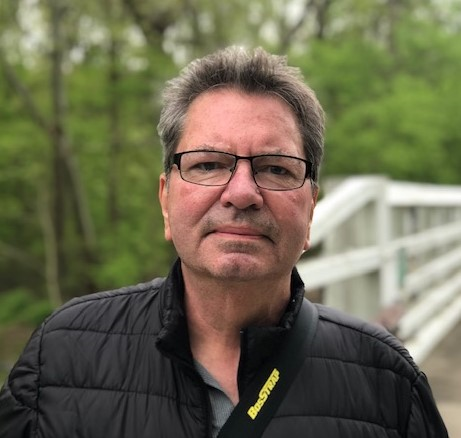 Henry “Buddy” McGovern left this life on June 29, 2019 after a brief but brave bout with cancer. The loss will be deeply felt among the many lives he touched, including the countless people he assisted during his work as an American Postal Workers Union representative, his 30 plus years at the Merrick Post Office, and his extensive network of friends family, and bugs.

A tireless insect supporter, Bud spent hours snapping micro photos of them in their natural habitat. He maintained an ant farm and created a spider sanctuary in his yard. But perhaps his boldest—and most controversial—advocacy was his unconventional attempt to erase the bug stigma.

Bugs were just the beginning. Buddy, 66, was a devoted prankster. No one was safe from his bag of tricks, which included everything from a fake severed leg to slipping replicas of critters in cups, plates, counters, crevices—basically anywhere that would surprise an unsuspecting family member or random unlucky waitress or waiter.

Underneath the gags and sharp wit, Buddy’s true talent was making everyone in the room laugh. He deftly used humor to make new people feel welcome, elicit smiles from children, and melt even the iciest of hearts.

Buddy loved to travel, making numerous trips with his wife to Europe and throughout the US.  He was a wonderful photographer, artfully capturing not only his beloved insects, but also flowers, landscapes and people.

His kindness and generosity were expressed in his attempts to perform a daily mitzvah.  Bud was an avid reader, favoring books on history, trivia, travel, and animals.  He loved swimming in the waves of Long Island beaches.  He was also a long-time fisherman, and also enjoyed visiting local parks and nature preserves.

He was a loving and devoted husband, and leaves a trail of friends from Buffalo to Dallas.

Buddy is survived by his wife, Pat; his sister Valerie; along with his brother Dennis, and sister-in-law Ginnie, as well as nieces and nephews Dennis, Thomas, Jennifer, Mark, Nicky, Frank, Andrea, Melissa, Paul, Brad, Kyle, Kara and Jade.

In lieu of flowers, donations to the American Cancer Society would be appreciated.

Share Your Memory of
Henry
Upload Your Memory View All Memories
Be the first to upload a memory!
Share A Memory
Send Flowers