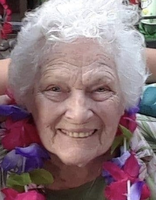 ROEMER, Alicia L. Boyle entered into eternal rest on Wednesday March 11, 2020. Alicia was born in Brooklyn NY on Oct. 16, 1924 to James and Elsa McCrea. In 1944 she married Jack Boyle, raising 5 daughters together before he passed away in 1984. In 2007, at the age of 83 Alicia married her life-long friend Fritz Roemer. The had 5 years together before he passed in 2012. Besides her family, Alicia had three passions... her faith, music and traveling. She was a member of the First Baptist Church of Freeport for over 65 years, serving as a Deaconess and a beloved Sunday School Teacher. Her unfailing faith and devotion to her Savior was evidenced in everything she did. Alicia was an accomplished soprano who performed not only in her church choirs but also various community choral groups, most notably The Freeport Community Chorale and The Bel Canto Chorale. In her later years, she combined her love of music and faith by singing at a local nursing home with a group of seniors from her church. After retiring in 1989, Alicia was able to enjoy several trips abroad as well as traveling out west. Her trips to Austria, Germany, England, Ireland, Scotland and Australia also gave her the opportunity to explore her family history as well as providing so many wonderful memories. Alicia and her family maintained residence in Merrick, New York for over 73 years. She has impacted countless lives by her love and example of Christian faith and kindness. We have all been blessed by her presence in our lives. Alicia is survived by her daughters, Louise Kelley (John), Nancy Boyle, Barbara Adams, Joanne Terrell (Ron) and Sally Boyle; her step daughters Carolyn Chastain, Pamela Carey and Chris Burke. Additionally she is survived by 13 grandchildren, 26 great grandchildren and 1 great-great grandson. She was predeceased by her sister Janice Luben (Herman) and her brother James McCrea (Bonnie) as well as 3 grandchildren. She will be missed by all who knew her. Visiting Sunday March 15 from 2-4 and 7-9PM at N.F. Walker, Inc. Funeral Home 2039 Merrick Ave. Merrick. Services honoring our mother will be at the funeral home on Sunday at 8PM. Burial at Pinelawn Memorial Park and Cemetery, Farmingdale NY on Monday the 16th. In lieu of flowers, we request donations be made to your favorite charity in her name.